Fukuji and Lum Physical Therapy hosted physical therapist students and faculty members from Osaka Kawasaki Rehabilitation University on September 13, 2013. The students observed treatments such as joint mobilization, traction, and electrical stimulation at the Kaneohe clinic, participated in work conditioning exercises and training at WORC, and viewed aquatic therapy at the Pohai Nani pool.

The group of students from Japan were led by Sensei Rie Takakura, P.T., a part time resident of Hawaii, who has been teaching in Osaka for a year. Sensei Takakura wanted to expose her students to physical therapy done in the U.S. as physical therapists in Japan work primarily in hospitals. Privately owned physical therapy clinics are not available so we were more than happy to share a little of what we do with our colleagues from Japan.

This weekend the Kokokahi YWCA in Kaneohe held its first annual Community Fair. The fair was sponsored by HMSA and Aloha Kia and provided the Windward community with food, fun, and entertainment. It was a chance for the YWCA to show off their newly renovated grounds. As one of their newest tenants, Fukuji & Lum Physical Therapy Associates participated in the event, providing free screenings, information about physical therapy, and drawings for shirts and massages.

While the day started with rain, it cleared up beautifully and allowed the lucky families that stopped by for free rock and rope climbing by Soultrek. There was lots to eat with ten food trucks. And local small businesses to display and sell their products.

It ended up being a great day and the YWCA was successful in bringing Windward families, businesses and community organizations together to show off what is one of the hidden treasures of Kaneohe. We hope to be a big part of this annual event and hope that all of our patients can join us next year! 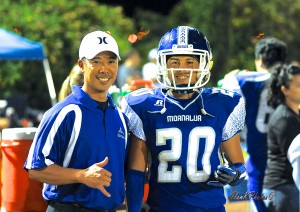 Fukuji & Lum visited Central Pacific Bank for their annual Health and Wellness Fair in September. The F&L staff enjoyed talking with CPB employees  about “What is Physical Therapy” and how they could benefit from our services. Our main focus was to discuss with employees how they could ergonomically correct their work space to prevent pain and future injury. We also had the opportunity to answer questions and perform physical assessments. 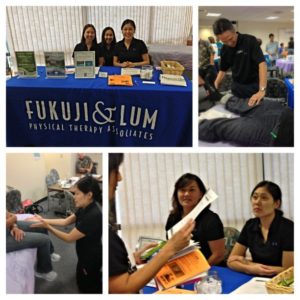 Fukuji & Lum was honored to participate in the Honolulu Police Department’s Annual Health Fair in August. We tested grip strength using a dynamometer and provided free physical therapy screenings to HPD employees. To beat the summer heat at Sister Roberta Derby Park, we passed out shave ice to everyone as a nice, refreshing treat! 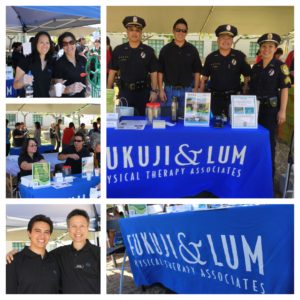 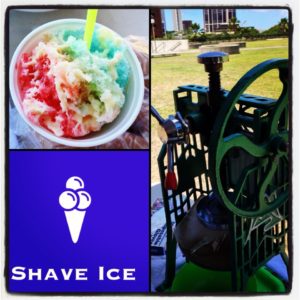 Good luck Vanessa on your new adventures! You will surely be missed! Thank you for your numerous years of service as an excellent physical therapist here at Fukuji & Lum! 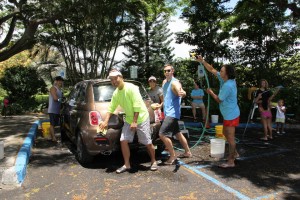 On June 15th, F&L employees spent the day washing cars for FREE! “It can’t be free, nothing is free these days!” was the response we got as people drove their cars up to get washed. Why was it free? It was our way of saying ‘THANK YOU’ to the community for their support of our company as we celebrate our 18th year here on the windward side.
We had a great time and had lots of fun washing all sorts of cars…mini cars, electric cars, big cars, hybrid cars, just to name a few. We’re already looking forward to surprising more people at next year’s FREE CAR WASH!

Welcome to the NEW W.O.R.C. site at the Kokokahi YWCA in Kaneohe!

It’s been two weeks since we closed our office at 45-781 Kamehameha Hwy. and moved out! Although we miss our old Satellite clinic, we love our new Windward Occupational Rehab Center (W.O.R.C.)!